What is LoRa wearable device?

Lora Wearable widely used in lots of IoT scenarios and can vary in different outlook style. Such as LoraWAN Watch, Lora GPS Tracker, Lora Badge, Lora Contact Tracker. Normally Lora wearable will be used together with the Lora Gateway and used with the background of the application scene for a two-way connection. So, what kind of LoRaWAN device does iSmarch have? Please check below our wide range LoRaWAN wearable will fit your needs. 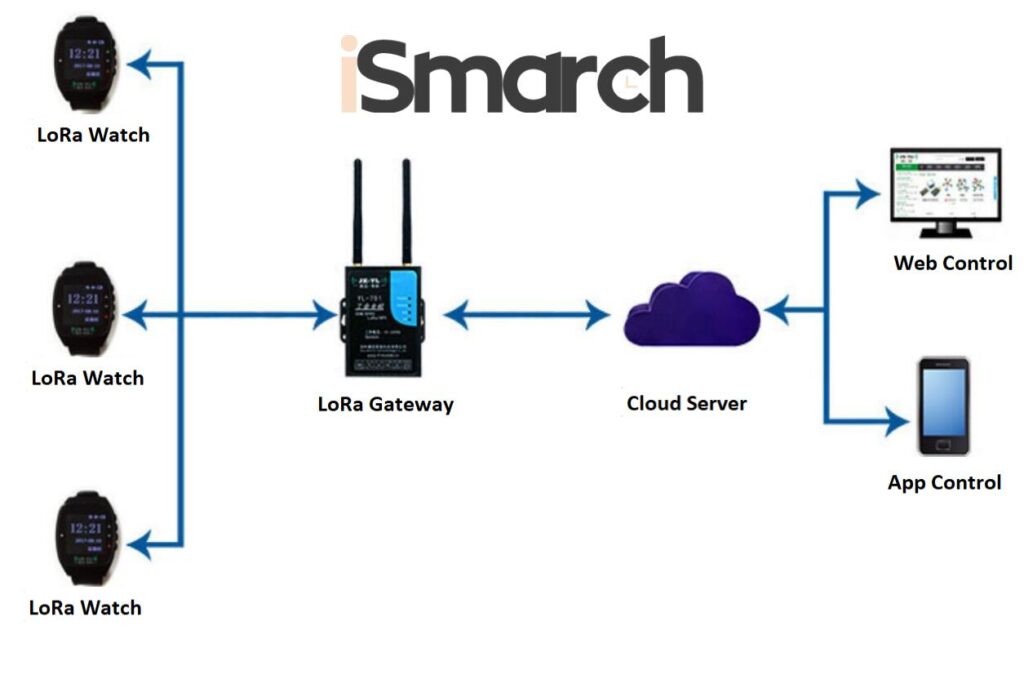 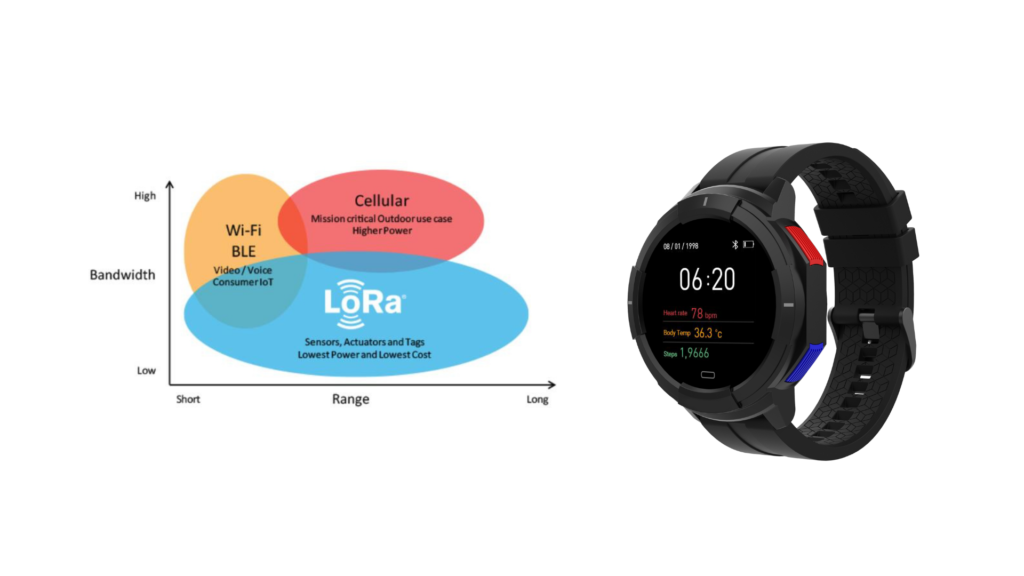 1.Heart rate, blood oxygen, body temperature, blood pressure, sleep, pacing, ECG and other vital signs are monitored in real time and can be uploaded to the background or App via the built in Bluetooth, Lora, NB, UWB

2. The J3 has a built-in low-power GPS high-precision module and 3-axis acceleration (or 9-axis including gyroscopes, magnetometers) for outdoor high-precision positioning, while the watch has a built-in BLE beacon for indoor positioning, of course, you have to install a Bluetooth base station to do that. This allows for high precision indoor and outdoor positioning and is the perfect combination of Lorawan and Bluetooth low energy. Compared to 4G CAT1 cellluar, it has lower power consumption and more secure network data

3. Lora Watch also supports physical buttons for SOS one-button calls and alarms, such as SOS for elderly people who fall, when close to a dangerous area

4. The J3 IoTwatch has an automated monitor that detects when people go to the workplace to see if they are fitted with a bracelet, such as when the wearer takes it off or puts it on, it is automatically reported to the platform or APP, thus preventing people from going on the job without wearing it, to realize the intelligent management of all staff.

5. The J3 can be customized for storage, the Bluetooth platform has a maximum memory of 16 MB, but we can develop a dual platform that can be used in some chronic disease management or telemedicine management scenarios, storage PPG GSESNOR data for storage and analysis.

6. Lora bracelet support background and App two-way down and confirmed messages, you can also set their own ID and name, two-way message delivery.

7. The watch band width is standard and can be changed freely in any color and band. Watch cases can also be customized in a variety of colors.

LoRaWAN GPS tracker knowledge that you need to know?

LoRaWAN technology uses low power to transmit data over medium and long distances at low bit rates, so the data being transmitted is limited. Unlike other GPS devices, LoRa can transmit GPS location data over long distances, but at slower speeds. And LoRaWAN’s network is secure and privatized, so it fits a lot of IoT scenarios.

How does LoRa GPS tracker work?

LoRaWAN tracker locates the location of the wearer by wearing a product terminal device. The LoRaWAN GPS tracker in iSmarch not only has a location function, but also provides comprehensive vital signs to monitor heart rate, blood oxygen, blood pressure, body temperature, sleep, etc. , automatic real-time monitoring data and save. The remaining data is transmitted through a secure channel to the LoRaWAN Gateway, which sends it to the cloud, the server or platform, and if you have a professional application-side algorithmic team, they can do AI science on the raw data they receive, draw some data and conclusions that can help the user.

Shipping Management – transportation companies are increasingly using LoRaWAN GPS trackers to manage traffic, so shipping tracking with a LoRa GPS tracker is a worthwhile option. Using Lora GPS Tracker, the company ensures the delivery of products on time and in good condition

Asset tracking management – such as the warehouse of machines or goods, will often need to ship. A machine rental company will often move around. When Lorawan GPS is installed on your assets, you can track their GPS location at any time to prevent loss or to lock down inventory locations quickly.

PET tracking – pets are undoubtedly a big market, and pets are an integral part of their owners’ families. Consequently, a huge market exists for monitoring pet location in real time, which is one of the key purposes for Lora’s GPS Tracker

Child tracking – LoRaWAN tracker can be used to monitor real-time location and health status, which is also very helpful for children’s health and safety.

Patient tracking – Many people with chronic conditions suffer from multiple illnesses, so the LoRaWAN tracker is helpful in monitoring vital statistics such as heart rate, oxygen, blood pressure, body temperature, and ECG, in real time. When there is an exception, it can be sent to the platform, but it can also be used for indoor and outdoor location, security.

Vehicle and driver tracking – The Lorawan GPS tracker not only monitors the driver’s health, but also can locate the vehicle at any time for the safety of the vehicle. 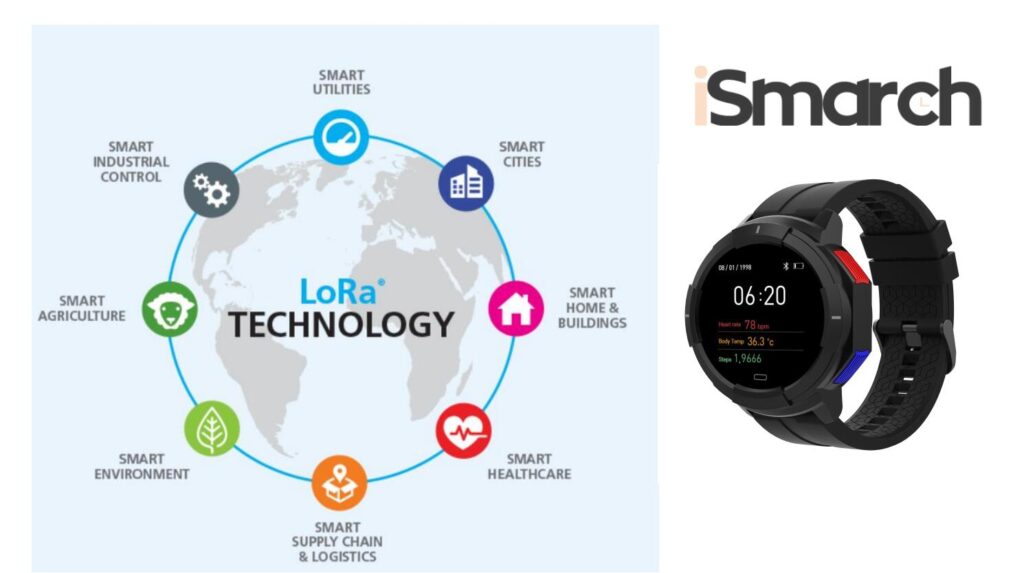 Integrate the most advanced sensors into LoRa GPS tracker: 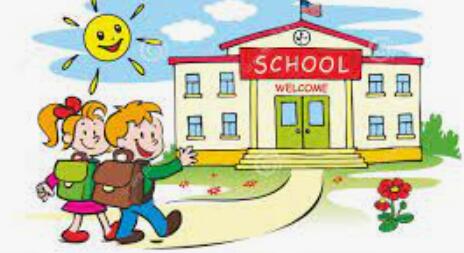 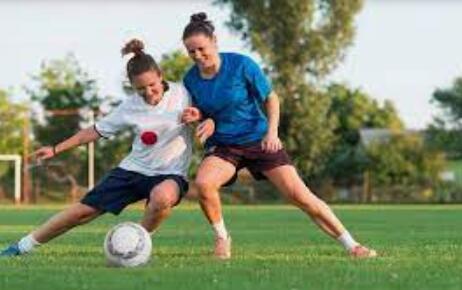 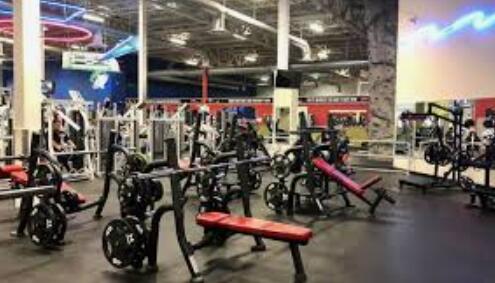 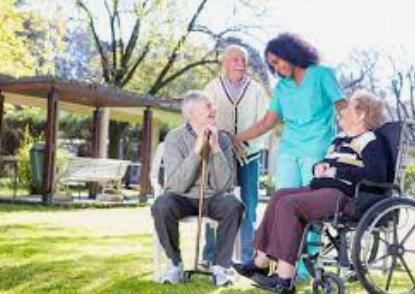 Elderly indoor Bluetooth beacon positioning, real-time monitoring of vital signs PPG heart rate, blood oxygen, temperature, and other parameters, and monitoring the elderly fell, SOS alarm to ensure the safety of the elderly life. We can also do an outdoor LoRa GPS location. 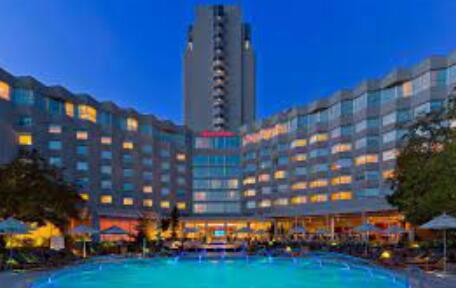 Staff wears Lorawan watches to receive the message. There are unusual circumstances that can be the first notice, reduce the search time, improve efficiency, and enhance the user experience. 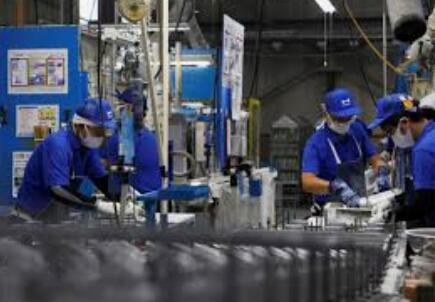 By issuing work orders through the Lorawan watch, workers can be confirmed through the wristband upon completion, improving work efficiency and ensuring smooth communication.

Why LoRaWAN used in IoT application?

The internet of things will also extend to remote environments, because of the limited M2M transmission coverage in the new environment, it is inaccessible and will require a power connction. The open LPWA standards of LoraWAN and 3GPP (LTE Cat M1 and Cat NB1) provide a solution that supports these barriers to IoT connectivity. That’s why iSmarch has the advantage of producing a Lora Iot Watch?

Lorawan is a widely used LPWA communication standard that operates by using unlicensed radio waves in the ISM (industrial, scientific, medical) band at frequencies ranging from 900 mhz to 430 mhz (the exact frequencies vary from place to place). As a result of using unlicensed spectrum, companies are able to create their own private networks easily. Lorawan defines the networking protocol and the system architecture, and Lora describes the radio layer of the network. Lora is powered by Chirp Spread Spectrum (CSS), which is energy-efficient and more powerful than traditional technologies. CSS has been used in military and space communications for decades due to its range and robustness, but Lora is the first commercial low-cost implementation of CSS.

Lora Network has a star-shaped layout where hundreds or thousands of devices communicate both in and out with gateways to the core network, which ultimately goes to the Internet. Signals from a single sensor or device are received by all gateways within a range, which improves reliability and opens up possibilities for location services. The network uses a complex “adaptive data rate” algorithm to fine-tune the communication between each device and the gateway to minimize power consumption and maximize reliability.

What are the benefits of choosing Lorawan

Coverage with CSS and ADR, devices can communicate with up to 15 km of gateways in open areas and up to 5 km of gateways in cities, this means that a single gateway can cover 700 square kilometers of all the surrounding equipment. Coverage also extends indoors to the basement or below street service pipes.

Extensive coverage and relatively low gateway costs significantly reduce the cost of LoRaWAN network deployment. For devices, the price of a communications module is in the $10 range, and unlicensed spectrum means the cost of a connection is just $1 a year.

Since signals from a specific device can be received by multiple gateways, the location of the device can be calculated based on the signal strength and/or signal arrival time of each base station, thus enabling network-based location services, can be used to track or geo-fence equipment.

The LORAWAN network is deployed on the free ISM band (EU 868, AS 923, US 915 Mhz) and allows any service provider or company to deploy and operate the Lorawan network without having to obtain a licence for any frequency.

The Lorawan Network supports a variety of vertical solutions that allow service providers to use a platform and standards to manage use cases such as smart buildings, precision agriculture, smart metrics, or smart cities.

The difference between Lorawan and 3GPP technology

For many requirements, LPWAN requires the lowest cost and the lowest power. In practice (about 20 messages per day) , Lorawan consumes five times more power than LTE CAT NB1. The peak current required has been reduced by 10 times — the equivalent of a reduction in the size of the battery by an order of magnitude — and its life has been extended by 10 years.

Another major difference between Lorawan and 3GPP is the use of unlicensed spectrum. Lorawan allows the easy deployment of “campus” networks (smart cities, smart buildings, smart airports, smart factories) with thousands of devices in a small area. The enterprise network can be completely under the control of the customer and the data is still encrypted end-to-end

Support open device development, take an example of our smartwatch: 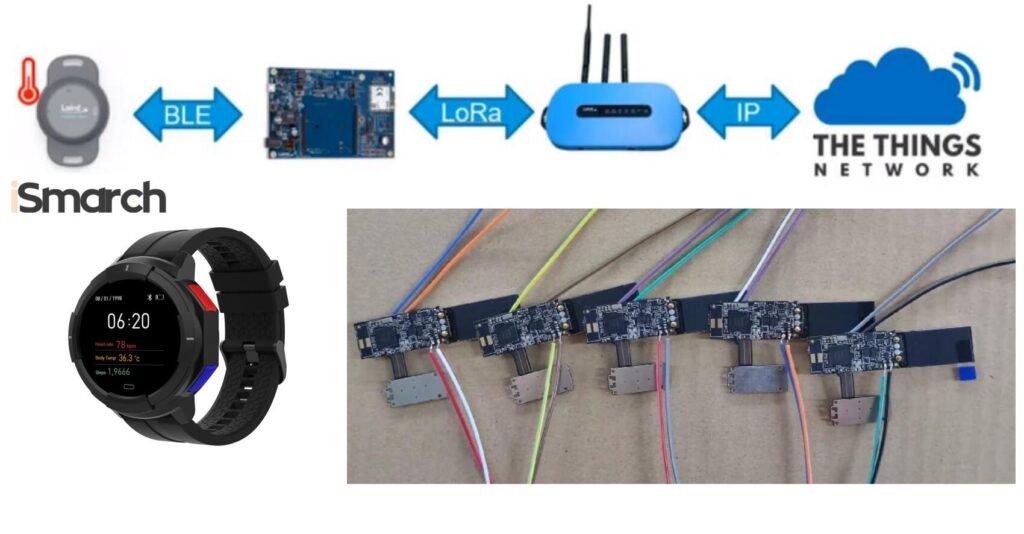 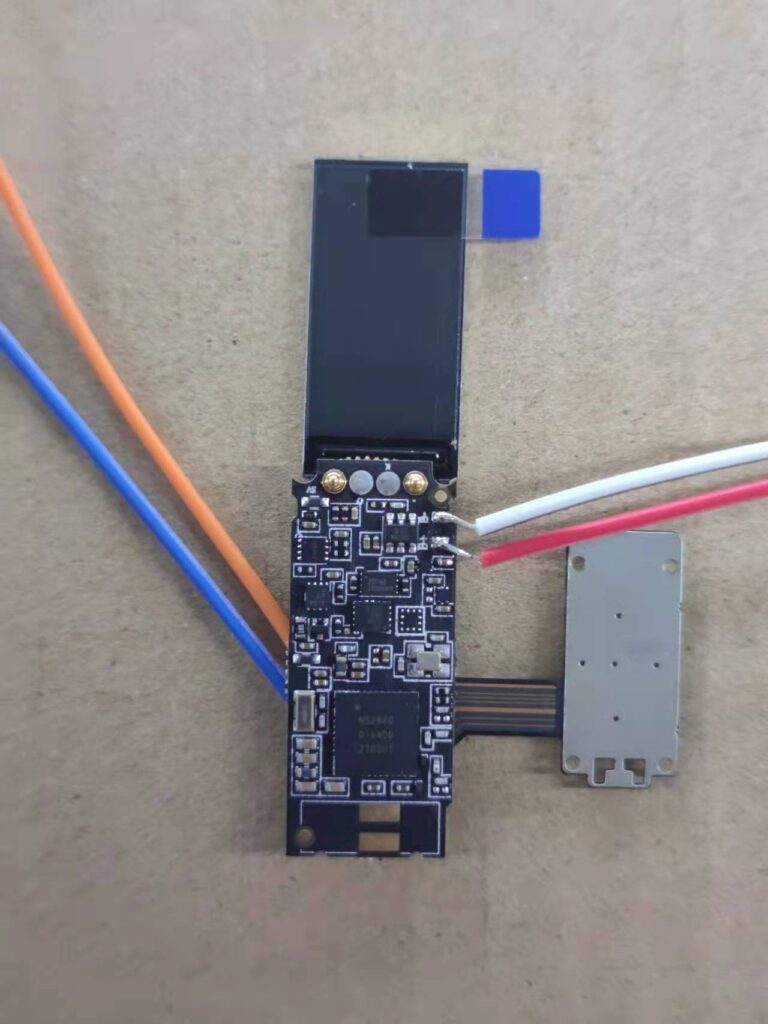 1.App integration with our Bluetooth protocol or App SDK

3.Based on our Hardware and choose one SDK

should config all IO ports on

6.Platform and APPS (IOS and Android)

All iSmarch LoRa GPS trackers are based on the LoRaWAN protocol. All of our Low-power electronics, can be used for up to three years because they consume less energy. In addition, our trackers are built in and offer high accuracy and precision sensors. This is beneficial because Global Positioning System can be deployed to any application and needs to be efficient and provide control.

iSmarch is a IoT vertical focused vendor that allows us to customize the functionality, firmware, and open device for our customers to develop their own devices. We also provide technical support for customer integration into the LoRa back end.

What are you waiting for? Contact US immediately to start your LoRa GPS Tracker project.

We will study your smart watch customization requests within 12hours and provide the most suitable item on-budget.